From the Lutyens & Rubinstein website: “We’re delighted that our first evening event since March 2022 will be Lauren Owen and Jess Kidd in conversation.

These two authors whose highly-anticipated new novels will be published in August join us to discuss the common themes of their books.” 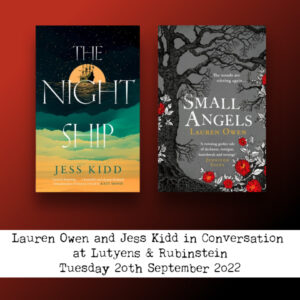 Small Angels:
From the acclaimed author of The Quick comes a hypnotic literary tale of sisterhood and first love, wonder and terror, the stories that tether us to the past, and the stories that offer a way forward.

When Chloe turns the key to Small Angels, the church nestled at the edge of Mockbeggar Woods where she is to be married, she is braced for cobwebs and dust.What she doesn’t expect are the villagers’ concerned faces, her fiancé’s remoteness, or the nagging voice in her head that whispers to her of fears she didn’t even know she had.Something in the woods is beginning to stir, to creep closer to the sleeping houses. Something that should have been banished long ago. Whatever it is, it’s getting stronger, and pretending it’s not there won’t keep the wedding, or the village – or Chloe – safe.

The Night Ship:
An imaginative historical epic of shipwreck, mutiny, fate and friendship from Costa Award-winning author Jess Kidd. 1629: A curious and bold young girl called Mayken boards the Batavia, the most impressive sea vessel of the age. During the long voyage, Mayken must find her place in the ship’s busy world, and she soon uncovers shadowy secrets above and below deck. As tensions spiral, the fate of the ship and all on board becomes increasingly uncertain.
1989: Gil, a boy mourning the death of his mother, is placed in the care of his irritable and reclusive grandfather. Their home is a shack on a tiny fishing island off the Australian coast, notable only for its reefs and wrecked boats. This is no place for a teenager struggling with a dark past and Gil’s actions soon get him noticed by the wrong people.

Some secrets won’t stay buried forever, and Mayken and Gil, two outsiders whose fates are inextricably intertwined, must save each other before it’s too late.